The Museum of Childhood in Edinburgh claims to be the first in the world to focus on the history of childhood, but the museum is not the only place in which some of these toys have been displayed.  Many of the dolls were the result of enthusiasm for collecting of one man – Mr Edward Lovett (1852-1933).  But collections are not only for the joy of collecting, but also the joy of sharing with a wider audience.

Lovett’s collection of dolls was displayed temporarily in the Museum of Cardiff in April and May 1914.  Following the success of this, he wanted (in 1915) to establish a permanent Children’s Museum in the East or North of London because ‘children are generally interested in hearing anything about their toys’.

Some of the dolls came from the East End of London, revealing Lovett’s interest in home-made or emergent dolls which displayed children’s ingenuity and creativeness.  But the majority were ethnographic. This section of the collection was later divided into the following categories:

Lovett explicitly claims that his dolls have ‘scarcely any artistic merit’ and ‘very little educational value’.  However, the dolls come from many countries, and the way they are displayed and categorised say something about the assumed racial hierarchies of 1915.  There is, for example, an extensive collection of Oriental or Japanese Dolls, very popular with toy collectors of the time.  In his notes to the collection Lovett notes that they are ‘always very characteristic of the Japanese people, and unlike any other doll in the world’. [i]

The centrality of dolls in Japanese culture was celebrated in the early twentieth century, linked to both religious ritual and ceremonies and ideas about marriage and family life, at the level of both the imperial court and in folk traditions.  This was reflected in the dolls festivals of Hina Matsuri (March 3, Girls’ Day) and Flag Day/Boys Day on May 5.  However, the historian Judy Shoaf argues that Japanese dolls were used to reflect Western portrayals of the Japanese as a ‘child-like people of a toy-sized land whose women were doll-like’ in contrast to the seemingly more masculine, more powerful and more adult British.[ii]

Similarly, the African dolls collected by Lovett are largely ceremonial – Ushabati dolls from Ancient Egypt, fertility dolls from Sudan, used in rituals but also demonstrating what was perceived at the time to be the primitive nature of African religion and culture, perceived to be more superstitious and less refined than contemporary British religious observance.

The Indian dolls in the collection are largely made of rag, assumed by Lovett to have ceremonial value, but not accorded the same attention or focus as those from Japan.  They are a minor part of the collection, certainly not reflecting the prominence of dolls in the South Indian culture – such as the annual Tamil tradition of Bommai Kolu or Bomma Golu (Court of Toys) during the festival of Navratri (part of Dasara). 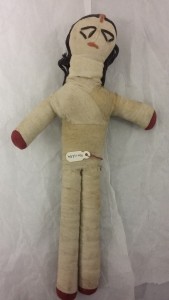 Their simplicity and lack of artistic detail reflected contemporary constructions of Indians as backward, unsophisticated and in need of modernisation.  Lovett’s collection on display, therefore – perhaps unconsciously – represented and catalogued the racial hierarchies of British imperialism, the infantilisation of other cultures and widely held beliefs in social Darwinism in the 1910s. 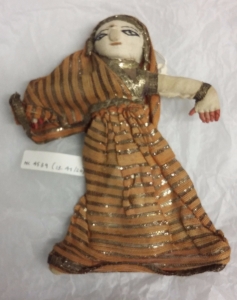 But the dolls exhibition tells us more than crude racial hierarchies.  Lovett was supported in his desire to establish a museum by an article in the East London Advertiser in 1915 which suggested that, in line with Lovett’s ideas, ‘toys provide a wonderland for children, a world of romance and make-believe which is essentially their own’.  Later the author argued

‘Thus from the remotest period down to the present day we have records which show that children have never been altogether without toys.  Human nature is, in the main, the same in all ages and in all climes, and if you placed into the hands of a 20th century child a toy which had been used by some forgotten infant a thousand years ago, it would probably give as much delight and satisfaction as more expensive modern toys can give.’

Displaying the dolls would therefore ‘enable children in East London to compare their own toys with toys of other days and other countries’.  This indicates the double educational benefit of such an exhibition, not merely visually representing imperial values, but also the universal values of childhood and play.  This was based on the assumption that all children are similar, they are all interested in play and they will all be interested in what others play with.  Childhood as a time of education and play was therefore a universal experience,  constant throughout cultures and common to all children, transcending boundaries of class, race, gender and religion.  The dolls were to be visual representations of similarities and connection between poor British children and others, highlighting the innate nature of children as playful, as innocent and as curious.

Despite Lovett’s attempts – in September 1919 he noted ‘his really hard struggle on behalf of the poor little kiddies of East London’ – the dolls were never exhibited in this way.  This was taken by Lovett to demonstrate ‘a want of interest in the aforesaid dirty little kids’ rather than a lack of interest in his collection.  It was eventually sold to the Museum of Cardiff in 1919.  From there it was given on permanent loan to the Museum of Childhood in 1961, where Edinburgh’s children of today can claim a connection to the children in the past.

Lovett’s ideas that childhood was universal and all children played was recognised only a few years later in 1924 when the League of Nations adopted the Geneva Declaration of the Rights of the Child.  While not mentioning play specifically, it was the beginning of a global children’s rights movement based on the claim that certain characteristics of children were common across time and space.

Also see: Beverley Fenton, ‘The Lovett Collection of Dolls: Ethnic and Unusual Dolls from Around the World’, City of Edinburgh Council, 1998

Catriona Ellis is a volunteer at the Museum of Childhood and has just completed her PhD on Children and Childhood in Colonial South India in the 1920s and 1930s. She is now helping to document the Lovett Collection at MOC.